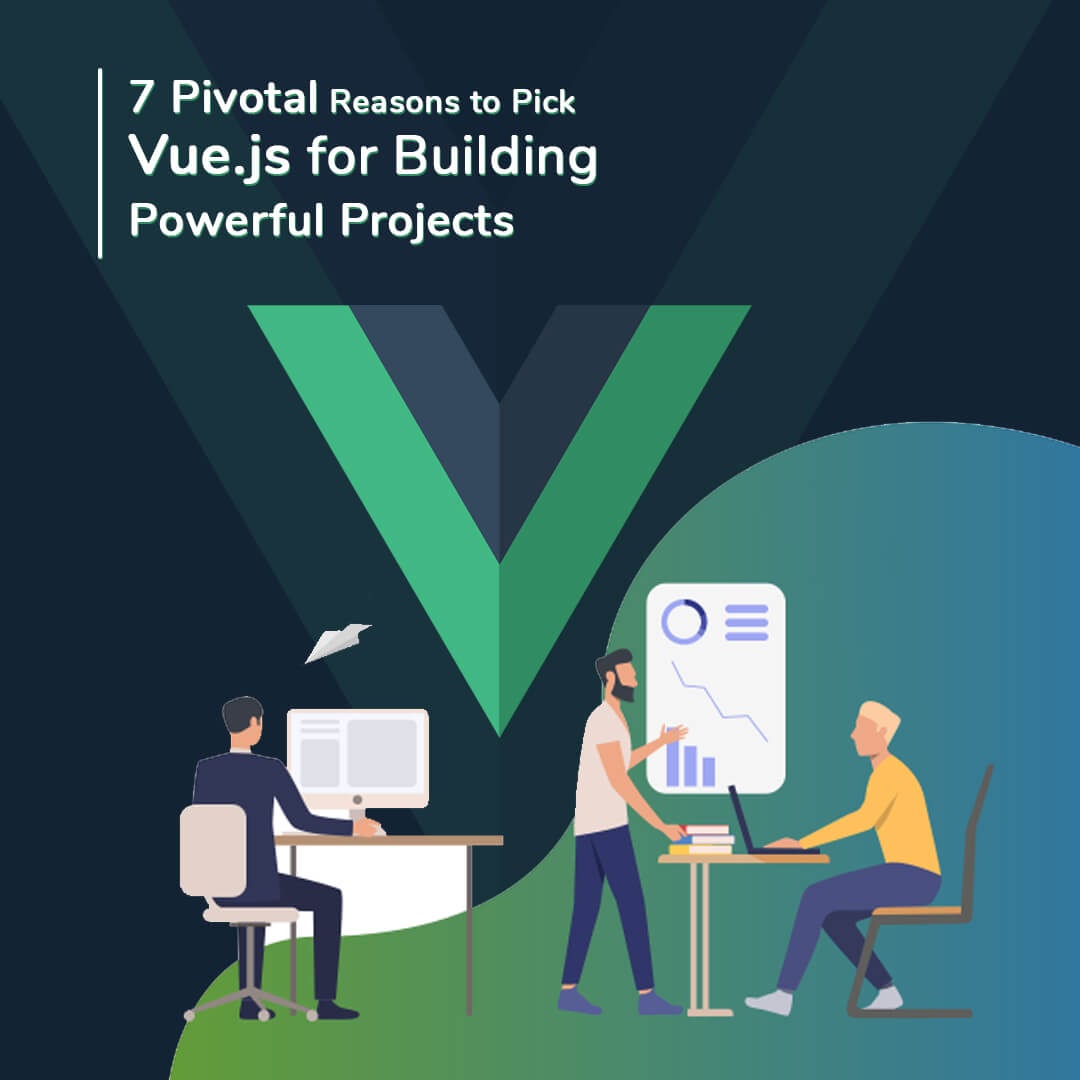 This blog will pronounce you all the prominent reasons to prefer Vue.js. We have a squad of expert Vue.js developers to help you. You can contact us anytime to get the best help.

Let me take you to Have you ever given a thought about Vue.js?

Vue.js drive so that you can start churning this framework for your next project.

It is an open-source framework that primarily concentrates on the view part i.e. the front-end layer of the application.

Vue.js was developed by Evan You in 2014 and soon became one of the topmost names in the world of application development.

The framework has released many versions so far with enhanced features and functionalities as well as major bug fixes.

The last version of Vue released in the market was Vue 2.6.11 released on December 14, 2019, and it is all set to release Vue 3 as its next important version.

Vue.js offers many impeccable features that make it a perfect fit to develop immaculate front-ends. The list can be seen as under

The first and foremost in the Vue.js important features list is components. The feature enables developers to generate reusable custom elements.

Vue.js provides HTML based templates responsible for linking the DOM with the Vue.js instance data.

Vue.js encourages easy navigation between the pages accomplished with the help of vue-router.

In Vue.js, there are many ways using which developers can implement transitions to HTML elements whenever they are included or deleted from the DOM.  This way developers can make the UX of the application more conversational and collaborative.

Vue.js provides a number of built-in directives including v-if, v-else, v-show, v-on, v-bind, and so on. These directives aid developers to perform many significant operations at the front-end layer.

Like other development frameworks including React and Ember, Vue.js also employs virtual DOM. In this approach, any modifications performed by the developers are not directly implemented to the actual DOM, in fact, a copy of the DOM is created and the changes are made to this replica first. Only the final changes are updated to the real DOM and the rest are not.

This is an effective and budget-friendly way to make the modification process faster and easier.

This feature of Vue.js enables developers to perform a number of development tasks including providing or modifying the values of HTML attributes, modifying the styles, assigning the classes, etc. with ease.

Prominent Reasons of Using Vue.js for Your Next Application

Vue.js offers many significant benefits capable of encouraging you to use it for your upcoming application. The most important ones can be seen as under

The very first advantage of using Vue.js in your projects is the simplicity it offers. It is very simple to integrate Vue.js with your ongoing web projects. You can simply start coding with it without having much background knowledge of JSX or ES2015.

For this reason, it is a pretty good option for developers who want to adopt an accelerated development environment and make a move.

The availability of clean and detailed documentation is a crucial thing that encourages developers to adopt a new framework.

Vue.js has clean and easy-to-understand documentation using which any new developer with little knowledge of HTML and Javascript can develop a web page without any hassle.

Vue.js is an easy to understand framework with an uncomplicated and sophisticated structure. Due to this, it can be combined with your existing web projects very easily. The framework can be used to create both small as well as large scale applications because of its awesome structure.

The size of Vue.js framework is quite small and ranges somewhere around 15-20kb. Due to its small size, any user can easily download it in negligible time and make use of it.

Vue.js is a highly flexible and scalable framework. It enables developers to draft the templates either in HTML files or Javascript files with the help of virtual nodes.

The framework also allows developers to easily inject and use the tools like template engine, CSS preprocessor, etc. in their underlying projects.

Comparison of Vue.js with Other Development Frameworks

Vue.js has become the trendiest development framework for developing user-interfaces and single-page applications in a very short span of time.

The framework has already acquired 174k stars on Github and the numbers are rising with each passing day.

So, folks, I hope you have received all the answers to your questions and confusions regarding Vue.js. Hire Vue.js developer from Indylogix and enjoy all the amazing benefits provided by the framework. All the best!